iPhone 6 leaked: 4.7 inch screen, New Design with an All Metal Back

by Bharat NagpalMay 6, 2014
15
Now Reading
iPhone 6 leaked: 4.7 inch screen, New Design with an All Metal Back
Browse This Page

If you were waiting to get your eyes on the new Apple iPhone 6 before its launch, this is your best bet right now on what its going to look like. This latest leak comes courtesy Macitynet.it, who showed off photos of a phone that resembles the 1st generation iPhone, but is actually bigger and slimmer than the iPhone 5s. 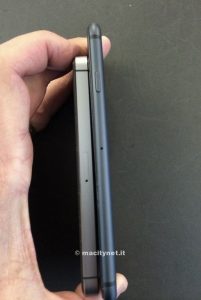 Previous rumors have always mentioned a 4.7 inch iPhone 6 from Apple, along side other upgrades like a faster processor and NFC capabilities. Till now we have  mostly seen mockups of the alleged iPhone 6 (see top), which have sort of been confined to a slightly bigger size and lesser bezel.

Reports also mention a 5.5 inch Apple Phablet headed for launch somewhere in the latter part of the year, which some how seems unlikely.

Apple’s strong change in design is expected as the company changes the appearance every second year since the launch of the iPhone 3G. Whether this will or won’t be the next iPhone is surely unknown at the moment, and Apple is hell bent on keeping it that way especially since the iPhone 5s’ Touch ID sensor was heavily leaked prior to launch.