Everything You Need to Know About the Apple Watch

by Nitya UppalSeptember 10, 2014
0
Now Reading
Everything You Need to Know About the Apple Watch
Browse This Page Share via
We had been waiting for the elusive Apple Watch to appear on Tim Cook’s wrist for a long long time. The day is finally here and we have to admit, it has been one of Apple’s most well-kept secret. At the massive Apple event held in Cupertino California, the audience couldn’t contain their excitement and stood up to greet Apple’s newest innovation. On the other hand, Tim Cook, CEO of Apple, managed to patiently walk the audience through a few of the exciting features of this insane device (he promised there was much more.)
The Apple Watch will be priced at $349 and will be available by early 2015. It will come in three variations – Apple Watch, Apple Watch Sport and the Apple Watch Edition. The wearable will be compatible with iPhone 5, 5S, 5C, 6 and 6 Plus. We’re glad Apple decided against forcing people to invest in the newly released iPhone 6 and iPhone 6 Plus.
Here are some things that you should know about the Apple Watch:

Personalised Interface and The Digital Crown

The company assured the audience that they’ve haven’t simply decreased the size of the iPhone to put it on your wrist. They spent time and effort to make sure the interface was made-to-fit. For this, they’ve developed the very useful ‘Digital Crown’. The company compared it to the revolutionary mouse, iPod’s click wheel and the much more recent, multi-touch screens. Instead of using pinch-and-view touch screen, which would inevitably crowd the screen, the Digital Crown will help navigate through the interface better. It sits neatly on the right side of the watch face, helping users scroll through the screen without blocking it.
Apple has also made the effort to provide a wide-variety of Watchfaces. Once you force touch the homescreeen, it instantly gives you options to change the style. Again, you can switch and check out different options using the crown. The Apple Watch uses a unique charging system, which doesn’t require alignment or exposed contact to charge. 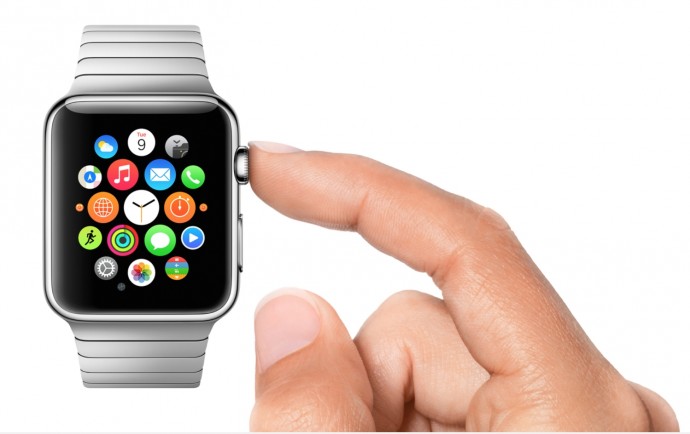 Since you would wear the Apple Watch everyday, all the time, the company decided to make sure it suits everybody’s style. The Apple Watch will be available in six designs. The watch comes with a mechanism which would make it super easy to switch between the straps. Picture this: if you have a suave leather strap on for an important meeting, before stepping into the gym you can make a quick switch to the sport-friendly band.
The straps include a sport band, soft quilted leather and stainless steel options. And since one size does not fit all, Apple has also developed smaller sizes.

Apple promises that the person sitting next to you would not be able to tell that you’ve received a notification. The notification buzz will simply gives the effect as if someone is tapping you lightly on your wrist. You can customise the apps which you’d like notifications from. It will the Bluetooth and Wi-Fi from the iPhone for all communication purposes. The built-in speaker phone and microphone can be used to receive calls and use the built-in Siri. With a simple tap on the digital crown, Siri can be activated.
One of the coolest features, the Apple Watch reads and analyses your texts. Uses that information to give you options of short then gives you Smart Replies.
Using the same NFC technology, which was also introduced on the iPhone 6 and the iPhone 6 Plus, you make short and direct payment. They’ve already roped in several partners in the US, where payments can be made with a quick touch. Apple now would like to replace credit cards and reduce the bulk from your wallets. Health and Fitness has always been an important arena for Apple. This Watch promises to take over and take it to a whole new level. Instead of simply tracking daily activities, the watch will actually encourage you to be more active. It has two key apps for this; the first will map your fitness activity through the day, while the second and the more important one, will help you set goals and then help you achieve them. It takes it a step further. The Apple Watch would like us to sit less, move more and get some exercise. It’ll help set goals according to the number of calories needed to burn, distance you’d like to achieve or the number of minutes spent exercising. These apps will take the extra effort to get to know you better, according to which it will then sent personal reminders to make sure you take care of your health. It will then share this data with third-party apps. Speaking of which..

Apple has already experimented with a few third-party apps. Developers will be able to create custom notifications for the home screen. For example, the City Mapper will remind you to get off at the right station, the BMW app will direct you to where you would’ve parked your car and the Nike app will allow you to challenge your friends to go for a run.
likethis
What's your reaction?
Awesome
0%
Epic
0%
Like
0%
I Want This
0%
Meh
0%
Posted In
Apple, Latest
Tags
apple, apple event, Apple Watch, cupertino, iPhone, iPhone 6
apple, apple event, Apple Watch, cupertino, iPhone, iPhone 6
About The Author