Microsoft Pushes the Boundaries With HoloLens, But How Far Will it Go?

by Happy NagashettiJanuary 22, 2015
2
Now Reading
Microsoft Pushes the Boundaries With HoloLens, But How Far Will it Go?
Browse This Page The much-awaited consumer preview of Microsoft’s new operating system, Windows 10 is here. This is, of course, the best Windows OS yet and tries to repent for Microsoft’s follies in Windows 8. There are a lot of amazing features such as the return of the Start menu, Cortana, a new browser dubbed Spartan and much more. Windows 10 seems like it might also give a boost to Microsoft’s ailing smartphone business that it acquired from Nokia. But the gizmo that won everybody’s heart was the HoloLens, a one of a kind wearable that brings science fiction into reality. We look at this amazing innovation from Microsoft and see if the biggest tech company in the world finally found its winning formula. A Seamless Interaction between Digital Life and Real Life

Microsoft hits the top podium stand with the HoloLens at least in terms of imagination and innovation. The HoloLens has no match if you consider the manner in which it is presented. There have been previous attempts at making augmented reality based holographic glasses like Meta 1, but they appeared rather rudimentary. Google’s HoloLens gets the power of Windows 10 that will give it a boost above the rest. Also, with this product, Microsoft finally gets to stand up to Apple, whose biggest innovative offering has been the Apple Watch, which suffers from an extreme battery draining problem. The demos of the HoloLens were definitely mind blowing. The virtual holographic objects appear as if they are a part of the real world. Interaction with this world also feels like a breeze. Microsoft has also unveiled the Holo Studio that lets you create 3D objects in a 3D environment and then using 3D printers, bring them into the real world. Unlike most of the product demo videos that exaggerate the possibilities of the technology, HoloLens seemed to perform exactly as it was presented. The creation process of the quad copter literally felt as if we were in Tony Stark’s workspace. 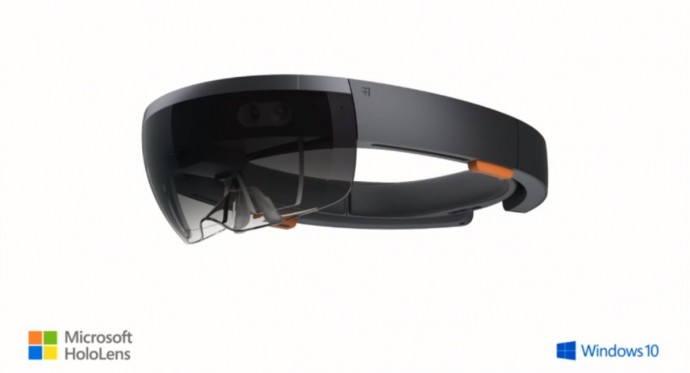 The HoloLens is a self contained computer on its own and doesn’t require connection to Phone or a PC.

The HoloLens is a self-contained computer. It includes a CPU, a GPU, and a dedicated holographic processor unit (HPU). It neither has wire nor does it require a connection to a phone, PC or any other device. It has 120 by 120 field of view, which is even wider than the Kinect. The wide view lets it see what your hands are doing even while they’re completely outstretched. The device has to process a lot of information that might lead to a lot of heat, to solve the issue; there are air vents on the side that disperse the heat. On the right side of the device are the buttons that let you adjust the volume and contrast of the Holographs.

HoloLens doesn’t just present an amazing bunch of features it also makes several previous technology such as various displays almost obsolete. With the HoloLens, you can conjure a display anywhere and of any size you desire. It can be used as a teaching tool and would bring a whole new meaning to “learning by doing”. Students can be given lessons in an interactive format where they’ll get the option to manipulate the lessons to see what happens. For e.g.; a holographic globe can be used in the class learning Geography that shows the movement of ocean currents and the formation clouds caused by it. This would be a lot more interactive than a dull map with lines drawn on them. Lessons get interactive and more engaging with HoloLens.

You can also bid goodbye to the game boards, and the gaming consoles as the entire world becomes a virtual gaming space. As the technology will progress, developers are bound to introduce virtual reality gaming that with the might of HoloLens, will be better than anything we’ve experienced till now. On the enterprise front, the HoloLens will allow for virtual interactions between the entire team even if they are sitting thousands of kilometres away. Industrial designing, when coupled with 3D printing, would make the design process a lot more interactive. A vehicle designer or an architect can have an all-round view of their project and can find deficiencies and solve it after which they can get a 3D model printed.

Mars, just a HoloLens away Microsoft has partnered with Nasa to create OnSight that lets scientists walk on Mars surface.

The coolest aspect of the HoloLens is how it is useful for the scientists at NASA. Now the researchers can have an immersive view of the Martian surface. To aid the scientists, Nasa and Microsoft have created a software called OnSight. Using the data sent by the Curiosity Rover on Mars, the scientist can have access to the surroundings of the rover to almost the same degree as a geologist on earth. Nasa plans to proactively use the OnSight software for the research. They also plan to integrate the technology in future missions including the next Mars rover expected to launch in 2020.

Microsoft will be opening the platform for developers this spring. The developers will get access to all the information during Microsoft’s Build conference from April 29 to May 1, 2015. Microsoft has said that it will be priced for both enterprise as well as consumer users. With the HoloLens and the successful preview of the Windows 10, Microsoft has finally managed to win our hearts again. With the HoloLens, everybody gets to be Tony Stark. Microsoft has not just pushed boundaries of holography but has also set a technological standard for others to match.

Dear Apple, that Watch just doesn’t cut it anymore, show us something that really blows our minds.

Happy Nagashetti
iGyaan Network's newbie Happy is a Technological Hedonist, Traveller, Photographer, Curious Humanoid and a giant foodie who is always pumped up for new adventures.
You Might Also Like
BusinessEntertainmentLatestLifestyle
Read More