Hands On with the LG G4

by Meenakshi RawatJune 19, 2015
0
Now Reading
Hands On with the LG G4
Browse This Page Unveiled back in April, the latest flagship from LG’s stable, LG G4, is finally out in India today. As scheduled, the Korean electronics maker today released the premium handset in the country, while pre-bookings have already kicked off on the LG India website. The handset is available with a price tag of Rs. 51,500.

We got a chance to get our hands on the device and here’s our first experience: The LG G4 looks premium with its leather-clad backplate. It serves a dual purpose – the smartphone looks amazing, and at the same time it provides a better grip. The leatherback is resistant to water, to help prevent staining and to allow it to wear naturally over time. LG hasn’t provided touch capacitive buttons on the botton, instead they are on the screen itself. The company says that it is a first on the phone and results in higher brightness and contrast. 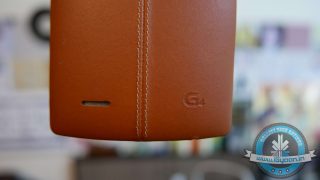 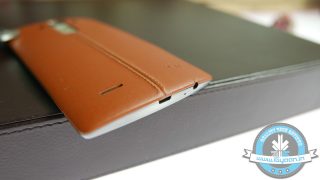 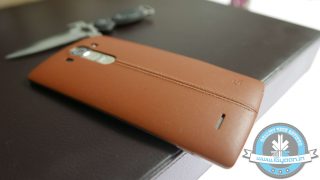 At the bottom of the handset is a 3.5mm headphone jack, a microphone hole and a charging port. The top has a secondary noise cancellation microphone and an IR (Infrared Blaster). Surprisingly, there aren’t any buttons on either the left or the right-hand side. The back boasts the massive camera, power button as well as the volume rockers. The processor fitted on the device is a 1.8GHz Hexa-core Qualcomm Snapdragon 808 processor with Adreno 418 GPU. LG says that the Snapdragon 808 churns out power similar to Samsung’s octa-core Exynos chip. With 3GB RAM, the internal storage space of the G4 is 32GB, which can be expanded via a MicroSD card up to 2TB. As teased, the smartphone runs on Android 5.1 Lollipop. One of the most highlighted features of the device is its powerful camera. It boasts a 16MP camera with f/1.8 aperture (widest aperture on any smartphone camera) equipped with Optical Image Stabilization 2.0, color spectrum sensor, and Laser Auto Focus functionality.

The camera on the phone offers a manual operation mode which brings in a variety of options like exposure, white balance, color temperature, ISO, aperture, RAW mode and many more. The front facing camera is 8MP also with f/1.8 aperture. The handset is powered by a removable 3,000 mAh battery. Buyers of the handset will get 100GB of free space on Google Drive for two years. The phone will be available in four colour options – Black, Blue, Yellow, Beige. The back plates of the phone are carved out of leather and will come in multiple shades.

Watch our hands-on video below:

Meenakshi Rawat
iGyaan's newbie Meenakshi handles content at iGyaan. She is an ultimate foodie, loves travelling and likes to read.
You Might Also Like
LatestLGMobileUnboxing and Hands On
Read More