Here’s How Force Touch Will Work on the iPhone 6s

by Nitya UppalAugust 11, 2015
12
Now Reading
Here’s How Force Touch Will Work on the iPhone 6s
Browse This Page Back in March, when Apple unveiled its new MacBook it brought out minor tweaks which would soon turn out to be major innovations of the future.

Along with the MacBook came the USB Type-C, their refined Battery tech and most importantly, Force Touch technology. It was the first time, the three elements had been introduced by a major commercial company. Thanks to several leaks, it has now been confirmed that the next iPhone will also include some of these elements. We know that the trackpad of the MacBook uses the Force Touch, but how will it be implemented on the iPhone 6s?

Simply put, it is the mechanism which senses pressure. It is an entirely novel innovation that merges the previously released Multi-Touch with force sensors. That means besides sensing the multiple points of contact on your screen, the new feature can also gauge the amount of pressure put on each contact; detecting the subtle difference between the quantity of pressure imposed. 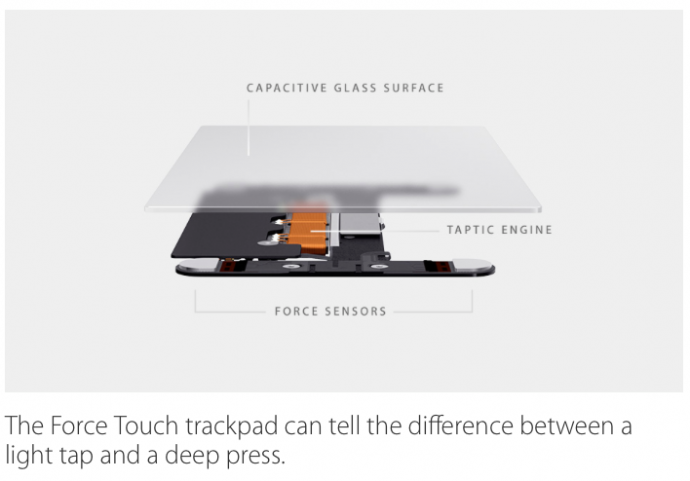 The current generation of MacBook’s use a ‘Diving Board’ design. The top part of the trackpad remains stable, any part of the lower end can be used to click or right click. The new Force Touch trackpad, gets four new sensors – allowing you to click using any part of the designated surface.

Here’s how the upcoming iPhone is expected to use the technology :

To enhance your music experience: Now, instead of clicking the actions button on the right side of each track listing, one can just deep press on the listing for a song and immediately options to add the song to your playlist or to listen to it later, will appear.

Shortcuts are said to become even shorter: The user can now apparently just press the phone on the app icon and be directly navigated to the Voicemail tab or even the Favourite or For You tabs.

Some other features: One is said to be able to view or preview webpage links, address or contact names, maps, definitions to words etc directly, with the use of Force Touch.

Reports suggest that Apple plans to expand the Force Touch technology by incorporating it beyond their core apps and operating system for developers to be able to ship iOS 9 App Store apps. Apart from this, the new and rumoured 12.9 inch iPads are also said to feature the Force Touch.

The expected unveiling date of the iPhone and new iOS-based Apple TV is said to be on the 9th of September 2015.

Nitya Uppal
Nitya is a Fashion Geek and a girl who is excited by the awesome. She loves her burgers and cannot get enough of them. She heads content at iGyaan Network and iGyaan Publishing. Find her on twitter below.
You Might Also Like
AppleLatestTech
Read More