by Vipul VijSeptember 13, 2017
1
Now Reading
Apple iPhone X To Go On Sale In India On November 3 Starting At Rs 89000
Browse This Page Tim Cook took the Steve Jobs Theater stage to introduce the successor the to original iPhone from 2007 on September 12. The iPhone X (pronounced as iPhone Ten) is touted as the future of phones by Apple and features a huge design departure from the previous generation iPhones. The iPhone X has an all-glass design with a stainless steel frame around the edges. The flagship iPhone X has a 5.8-inch 2436 x 1125 px OLED True Tone Super Retina display with minimal bezels around it. The phone runs iOS 11 and is powered by a 3,000 mAh battery which charges through the Apple signature lightning port placed at the bottom of the phone. Because of the all-glass design, the iPhone 8 also has wireless charging. Under the hood, the smartphone has the Apple A11 Bionic chipset with a neural engine, a hexacore processor, 3GB of RAM and storage options of 64GB, and 256GB. As is with every iPhone, the onboard storage can not be expanded via a microSD card. The small bezels mean there is no physical home button, which is now replaced with gestures for navigation. Siri is activated by pressing the now larger lock/unlock button. The iPhone X is also IP67 certified for water and dust resistance, and wireless charging. 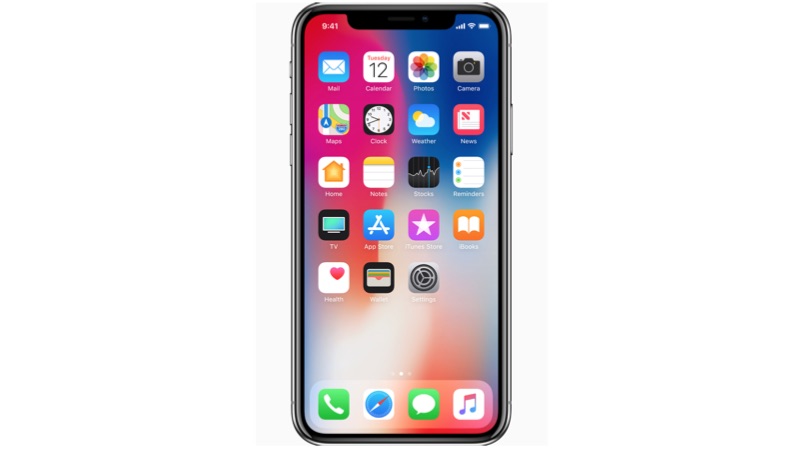 Apple has gotten rid of the TouchID and replaced it with 3D facial recognition. The technology is called FaceID and unlocks the phone by just looking at it. The new iPhone X will detect your face even in the dark by mapping your face. Apple claims the chances of someone else unlocking your iPhone through FaceID is one in a million. FaceID will work with Apple Pay and third party apps that supported TouchID. Another feature is called Animojis. Yiu can create emojis controlled by your face and share it on iMessage. On the optics front, the iPhone X has dual 12-megapixel rear cameras, and it’s equipped with dual optical image stabilization. The sensors are both larger and faster, according to Apple, and the main camera is equipped with a wide angle lens and has an f/1.8 aperture while the secondary telephoto lens has an f/2.4 aperture. In between the two cameras is a quad-LED True Tone flash. Both the front and back cameras have the portrait mode. The rear cameras have the portrait lighting feature, just like the iPhone 8 and iPhone 8 Plus.