Apple today announced the next version of their popular mobile os platform dubbed simply “iOS 7”. While it is traditional “Apple” to bring out requested changes with a lot of hype, this time around Apple has actually overhauled the entire OS.

iOS 7 actually puts together a great mix of design and usability and the fact that Apple has incorporated features that were missing from the OS makes it a lot more exciting. Lets start off with a few of the highlighted features. Apple has simply added all you could ask toggles into iOS, Wifi, Bluetooth, Airplane mode, and even brightness can now be accessed by simply swiping from the bottom of the screen. Access Do Not Disturb or Lock your screen’s orientation or Play, pause, or skip a song. Connect to AirPlay-enabled devices. Quickly access your flashlight, timer, calculator, and camera.

This has been one of the most anticipated features on iOS especially after the huge success of the toggles in Android, Apple has created a whole new gesture to access just toggles from the bottom of the screen. The Notification center in iOS 7 will come with a Today tab, that will only give you notifications that are relevant today; birthdays, reminders, appointments and weather etc. You can access Notification Center from any screen, including the Lock screen. Just swipe down. With iOS 7 Apple has allowed all App developers to access Multitasking built into the OS, which will now enable better battery utilization and allow apps to run in the background while you focus on other tasks. The good thing is that iOS 7 learns when you like to use your apps and can update your content before you launch them. So if you are up every morning checking up on Facebook and Instagram, the feeds will be updated just before you check daily.

Quitting and managing background apps uses the new card style design. Press the Home button twice to see preview screens of the apps you have open. To quit an app, just swipe it up and out of preview. iOS 7 also automatically schedules updates during power-efficient times. Like when your device is on and connected to Wi-Fi you device will be magically updated.

Along with changing the design of the camera interface Apple has added a square picture feature right into iOS 7, allowing users to create those famous 4×4 stills and add filters. Honestly, we can’t wait to try out the new filters.

iOS Photos app has been a long list of clicked images from a camera roll, almost impossible to navigate, and that changes with iOS 7. Apple has added new features into the photos app called Collections, Moments, and Years ; essentially smart groupings of your photos and videos based on time and place. Tap Years and all your shots fill the screen. Each year holds Collections, like your trip to out of town and in that Collection are distinct Moments like from a monument on the trip or even a restaurant. An incredibly wonderful way to use all the meta data collected by the camera. 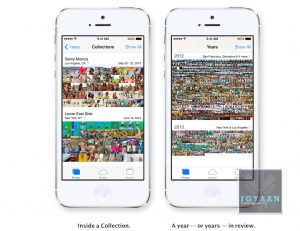 Photo Streams have also been updated to allow other users to add into your Photostream to allow for one consolidated Photostream between groups or even between 2 people. Airdrop has been excellent on the Mac, and sharing files is easier than ever. Apple has implemented the same features into iOS and now finally after almost 7 years of existence Apple devices will be able to share files amongst themselves via Airdrop.  The feature will allow users to easily share photos, videos, contacts — and anything else from any app with a Share button. This will be available to other developers so they can build it into their apps.

iDevices on iOS 7 are automatically visible in AirDrop to the contacts nearby running iOS 7. But you can also make yourself visible to anyone nearby using iOS 7 or to no one at all, almost like bluetooth, but via WiFi. Recipients can choose to save whatever you send. When they do, the content is saved right where it needs to be and files can be shared to multiple users together. Safari was updated on the new Mac OS X Mavericks and the same features comes to the new Safari on iOS 7. Buttons and bars stay hidden until one scrolls to reveal them, more content is then available on the screen.Browsing is now based on swipes , swipe left or right to go back or forward a page.

Just like with Safari on mac, the URL bar now allows you to search and Safari automatically suggests the closest match to what you’re looking for. The new Safari on iOS 7 lets you scroll your tabs in a new Vertical Cover-flow type UI. Shared links allows users to see all the URLs in theTwitter timeline, who posted them, and what they had to say about them. The new Reading list also enables you to remember something you read about.

However, one of the best features of iOS 7 Safari has to be the integration of iCloud Keychain. iCloud can now remember your account names, passwords, and credit card numbers for you. And Safari can enter them automatically whenever you need to sign in to a site or shop online. It works on all your iOS 7 devices and your Mac computers running OS X Mavericks. This feature makes life a lot easier for everyone, while security may be a concern initially, but one consolidated password vs a hundred makes life easier. Passwords are also suggested by Safari automatically for new signups, but we are unsure if this feature comes to Mobile Safari. Apple’s answer to all the streaming music services, iTunes Radio features streaming radio stations directly in the Music App. It personalizes your listening experience as you listen more and more and makes songs play automatically to your preferences from the past. You can access Featured Stations, stations inspired by music you choose or already listen to, and more than 200 genre-based stations. The Ability to create new playlists ; stations while you listen in is great and you can also see a list of all the songs you have heard and instantly purchase them if you like from the iTunes Store. The only downside iTunes Radio will only be available to the US at launch. Siri has been a true driver of sales for Apple, and rebuilding Siri was one of the things Apple was expected to do. The new Siri has a brand new voice, which is less robotic and more fluid. You can also change the sex of the voice from Female to Male and even select between several languages.

Siri is faster at answering questions and checks more sources, such as Bing, Wikipedia, and Twitter. And it takes on extra tasks, like returning calls, playing voicemail, controlling iTunes Radio, and more

The new Siri UI looks good too, when you ask Siri something, audio waves move across your screen, letting you know Siri is listening and processing your request. Answers are now shown directly in Siri, including web search results. You now also get results from Wikipedia and Twitter. The biggest most notable change in Find My Phone is the ability to lock the lost device from future activations, making a stolen iPhone a simple paper weight. In case a lost phone cannot be recovered, the person who finds it cannot own it, because turning off Find My iPhone or erasing your device requires your Apple ID and password. Find My iPhone can also continue to display a custom message, even after your device is erased. And your Apple ID and password are required before anyone can reactivate it. Which means your iPhone is still your iPhone. Apple has really played with location based services in the past and with the new iOS 7, the App Store shows you a collection of popular apps relevant to your current location.A special Kids category spotlights the best apps for children based on age. So now selecting apps for toddlers will be easy. iOS 7 also keeps your apps up to date automatically so you don’t need to go into the App store and update them manually. While this feature may never reach Indian cars, it is worth noting that this may lead a revolutionary change to the way mobile devices connect with vehicles. I

If your vehicle is equipped with iOS in the Car, you can connect your iPhone 5 and interact with it using the car’s built-in display and controls or Siri Eyes Free. Now you can easily and safely make phone calls, access your music, send and receive messages, get directions, and more. It’s all designed to let iPhone focus on what you need, so you can focus on the road.

Many companies have claimed to offer these features via Bluetooth, and apps within ecosystems of iOS and Android but a total package of in car access would be great to have.

Apple has finally delivered on expectations for a lot of anticipating owners of iDevices. Even though most of the features could have been implemented in previous edition of the mobile OS, Apple’s new iOS 7 brings a refresh to an almost stale OS in desperate need for change. Has Apple managed to woo the audience? We think so! But, how these features actually work will determine the capability of the new iOS 7, because no body would like another iMaps fiasco!