iPhone 6 vs iPhone 6 Plus : Is the Bigger Screen Worth the Extra Bucks?

by Parul Ritvik SoodSeptember 11, 2014
1
Now Reading
iPhone 6 vs iPhone 6 Plus : Is the Bigger Screen Worth the Extra Bucks?
Browse This Page Months of heavy speculation about Apple revealing two new phones this year, was confirmed at the mega event held in Cupertino California on 9th September. They arrived with much fanfare and we finally got to meet the iPhone 6 and the iPhone 6 Plus. Both the devices are larger and much thinner in size; the iPhone 6 comes with a 4.7-inch screen and its bigger sibling, the iPhone 6 Plus sports a 5.5-inch one. However, there is a hundred dollar difference between the two.

Now if you’re thinking about investing in one of these devices, you need to really think it through. Here are some differences that could help determine your decision. Both devices are made of aluminum and have a hard glass front. Also, there is a steel Apple logo at the back of the phone, that gives them both an elegant but still tough look. There are bare minimum changes in the design, the only difference is the size. As the name suggests, the iPhone 6 Plus is a lot larger than the smaller iPhone 6. Some of you may find it a bit too big for your hands. Also, at 7.1mm the iPhone 6 Plus is bit thicker, while the iPhone 6 is 6.8mm thick. As mentioned above, the iPhone 6 Plus comes with a 5.5-inch display while the iPhone 6 is at 4.7-inch. Previous iPhones, in the last few years, have come with much smaller screens in comparison to other high-end Android phones like Galaxy Note series and the Nexus series. However, there is no significant difference in display technology between the two. Both use IPS displays with ion-toughened fronts. As expected, iPhone 6 Plus gets a higher resolution and  pixel density. Where the iPhone 6 has a display of 326ppi (same as iPhone 5S), the iPhone 6 Plus offers 1080p resolution. 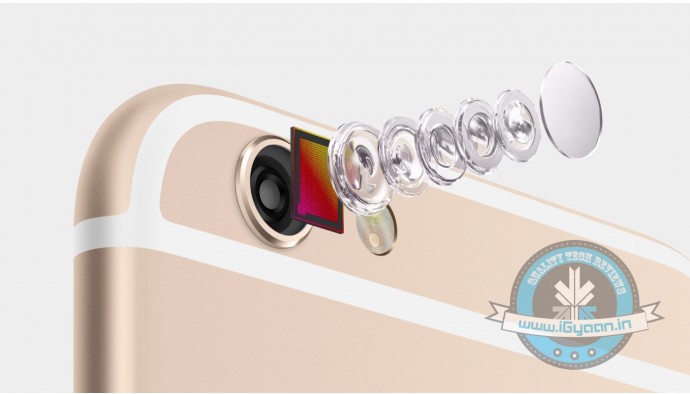 One of the biggest disappointment at the event was that Apple decided to stick to an 8 megapixel cameras. The new camera in the iPhones is an 8-megapixels with f/2.2 and 1.5 micrometer pixels. Although, Apple claims that the new camera comes with a better low light performance and focus than the previous generation iPhones. The iPhone 6 offers digital image stabilisation, while the iPhone 6 Plus comes with higher optical image stabilisation (OIS), hence giving the bigger variant an edge in terms of camera. Both devices are also equipped with the 1.2-megapixel FaceTime HD camera, with f/2.2 aperture.

The iPhone 6 have the same battery life as iPhone 5S that lasts about 10 hours. The iPhone 6 Plus gets a better battery life which can last upto 16 hours on a single charge, and that is pretty impressive considering the size of the device. The larger device claims 24 hours of 3G talk time, the smaller 14 hours, however, the company did not reveal the actual capacity yet.

Both phones are equipped with the same processor and a dual-core 1.4GHz 64-bit CPU. According to the company, the new Apple A8 processor offers 20 per cent better CPU performance than the Apple A7. All in all, compared to the original iPhone, the new processor in the iPhone 6 and 6 Plus is rated to be 84 times faster. Furthermore, Apple says the new A8 is up to 50 percent more power-efficient and will be able to sustain battery-sucking tasks for longer without heating up. Big or Small? Apple made sure that there is no weak link between the two iPhones. Both the devices have same screen tech, the same processor and similar-grade cameras with only a considerable difference is the screen size and the battery life. However, we prefer that extra display space of the iPhone 6 Plus and its greater battery life makes it more of a power user device. Keeping this and pricing in mind it will be better to spend some extra money get that extra real estate on the screen and battery life.

Parul Ritvik Sood
iGyaan Network's newbie, Parul is a Writer, Poet, Reader and Mass Communication Graduate with great interest in startups and entrepreneurship.
You Might Also Like
AppleLatestMobileRecommendations
Read More