Apple Might Screw Up the India Launch of the iPhone 6 and iPhone 6 Plus, Again!

by Bharat NagpalSeptember 17, 2014
5
Now Reading
Apple Might Screw Up the India Launch of the iPhone 6 and iPhone 6 Plus, Again!
Browse This Page

The new iPhone 6 and 6 Plus are expected to do well in India, especially considering the launch date which falls just shy of major festivals of our country. Oct 17th (the official launch of both big iPhones in India) is also just 4 days prior to the mega festival of “Dhanteras” which celebrates gold and anything that represents gold. A few days post that is the biggest festival of India, Diwali/Deepavali, which again brings about the act of gifting, shopping and spending money like there is no tomorrow. And finally “Bhai Duj” which again ensures that people are buying gifts for their respective brothers and sisters.

In 2013, Apple launched the gold color iPhone 5s, which was sold out within hours and remained out of stock for many a days. It is assumed that there  was a high demand of the gold color due to the excitement around the time of the above stated festivals. However, the way the iPhone was launched in India was the complete opposite of how Apple does things globally.

Apple in India, unfortunately does not have any of its own stores, no online store, no flagship stores and well nothing close to a “5th Ave” store. The company has its distribution tied up with Indian distributers “Ingram” and “Reddington”, who make a spectacle of the launch, by making available “limited” number of phone in limited cities. This redundant process has left people who actually want to buy an iPhone with a horrible taste. 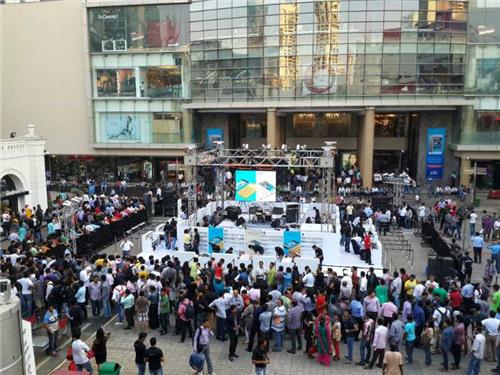 The launch is nothing close to what happens, for example, at a US store (or any other Apple store). There is this strange coupon system that lets you stand in line to buy an iPhone. Then there is a “special” coupon that lets you skip the line and jump ahead to a “special” area for VIP guests of big distributers i.e. Ingram, Reddington and networks like Airtel.

The standard line is essentially made up of store owners and employees of store owners, who want to essentially get stock that they can then sell from their respective stores to their respective “best clients”. There is a huge inflation of price of the iPhone as well. The same day as the launch of the gold iPhone 5s for (Rs. 54,500 for the 16GB variant), the phone was available at most dealers and brick mortar stores for as high as Rs. 70,000. An inflated price you had to pay for not standing in line.

There are a few who actually brave it and stand in line, but their numbers are limited and their wait times are catastrophically high. The event itself is loud and disorganized, usually outdoors and in the open (except a few), leading to long wait times and a chaotic atmosphere. The company also tries to build in live music and unnecessary shows with loud emcees making it look like a typical Indian fair (mela).

Despite claiming that the gold color had reached “out of stock” status, Apple India warehouses were full of them, and Apple chose not to sell anymore gold colored iPhone 5s, because it was affecting the sales of the other colors. Why does it have to be so difficult, and complicated for a user to buy a phone that they want to pay money for. Apple needs to bring their user experience to India, considering India is an important market for them. Apple is planning to officially be in India by next year, that means that the company will finally set up shop which may end all these theatrics. However if there are limited number of handsets to sell, a simple pre-order system should suffice, or a registration system which lets actual buyers who want to own these phones buy them. Apple asks for identification and credit cards at the time of purchase in the US and also limits the sale to a maximum of two handsets.

However in India, most purchases are made by cash and why should the company care about identification as long as phones are getting sold? To make matters worse, the people who are supposedly selling you the phones have not been trained as you would expect at a “genius bar”, they have been debriefed a few hours prior to the launch and know basic things like “turning on the iPhone” and “inserting a sim card”. They usually freeze up if you ask them questions around “iCloud” or some new elements like “handoff”.

The one good thing out of all of this is the fact that Apple has made the phones available in India early, unlike the iPhone 4s which was launched a good 9-10 months later, the iPhone 6 will launch a month after the US launch. However, this year expect the problems to be big, or well “bigger than bigger”. #BigFailSale anyone?

Bharat Nagpal
Founder and Chief Editor of iGyaan. Bharat likes to keep on top of technology ! Follow Him on Google Plus : Google+
You Might Also Like
AppleEditorialLatestMobile
Read More