Everyone is waiting to get their hands on Apple’s new smart watch. Although it is one of the late entrants in the smartwatch segment, it is one of the most awaited devices around. Months ago, at the mega-event held in Cupertino, the company claimed that the Apple Watch will be highly customizable. However, the details about how that would be achieved were few, until now.

The publication also revealed some screenshots of the ‘Companion app’ which gives us little insight of the new functions expected. According to screenshots, users will be able to manage and organize applications on the Apple Watch Home Screen via a virtual view on the iPhone Companion application.

According to the images, Apple Watch will rely heavily on voice commands for texting, browsing and other  functions. 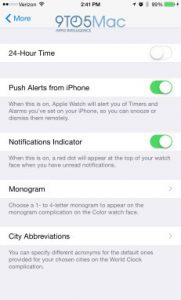 There’s also the option to have the Apple Watch unlock any time a user unlocks his or her iPhone, so long as the watch is attached to their body.

Apple Watch was announced back in September 2014 along with Apple iPhone 6, iPhone 6 Plus and Apple Pay. The company has said that it will ship in “early 2015,” however, it is widely expected that the Watch might ship in by March.

Want to know more about the Apple Watch? Click here.