Apple launched their first Macbook seven years back in 2008, showcasing an unimaginable super slim laptop to the world. Now the legacy lives on with Apple announcing its newest Macbook, which surprisingly will be called just the ‘Macbook’. Apple has yet again pushed the boundaries of laptop innovation which are simply commendable, though might have negated certain aspects.

One can’t deny that the new Macbook reinforces Apple’s philosophy yet again that computers are an extension of the person itself. Here are the coolest features of the new Macbook:

The latest Macbook gets a 12-inch Retina display with a very small bezel, with a resolution of 2304×1440, and an aspect ratio of 16:10. The display quality is certainly quite a notch up compared to the new Macbook’s predecessors, with the screen built into something that is as thin as a file folder. Apple has again manged to pull of something unimaginable bearing in mind the technical limitations with making something so skinny. Thinnest and Lightest, Ever

Talking about thin, the new Macbook redefines the concept of slim, it’s as thin as 13.1mm, compared to 17.3mm of the MacBook Air. It’s 24 percent thinner than the Air, the company mentioned at the event. The new Macbook weighs mere 2 pounds (lightest ever), which is amazingly only half a pound over the original iPad. 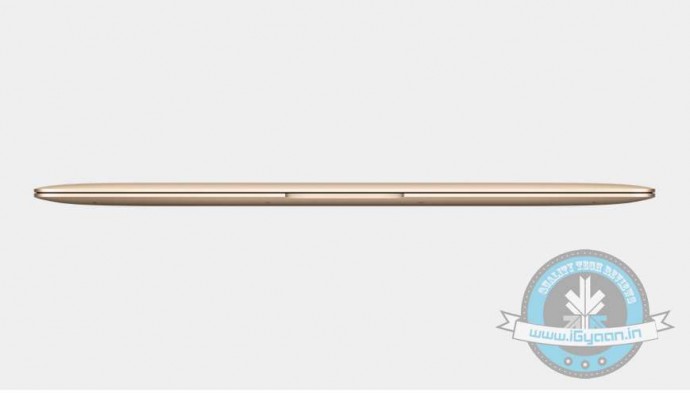 The new Macbook gets an entirely redesigned 12-inch keyboard. A welcome change compared to the Macbook Air which is less than the full size. The keys have been revamped to a new butterfly mechanism that Apple claims offers more stability with improved keystroke force distribution. Steve Jobs had a vision years ago that the mouse needed only one button, and it seems his vision is finally realised as Apple has added the Force Touch trackpad. One of the most nerdy aspects about the newly unveiled device is the fact that it comes with a Force Touch trackpad. Force Touch was introduced with the Apple Watch, it is the mechanism which senses pressure. The Force Touch trackpad has force sensors that detect how much pressure you apply on its surface. So basically, it can tell the difference between a light tap and a deep press. Death of the USB Ports

The new Macbook has a single USB-C which does everything from charging, to transferring data, sending videos etc. There’s only one port which means you cannot simultaneously charge your laptop or your phone. This is probably a byproduct of their quest to make the thinnest Macbook possible (and make our lives tange-free.)

Apple has yet again gone against industry standards. In 1998, Apple surprised everyone as its iMac G3 did not include a floppy drive. Apple claims to have added a new, custom-shaped battery that maximizes every millimeter of space, helping the MacBook achieve an all-day battery life. It gets a slightly beefier battery unit than the 11-inch Macbook Air and can deliver  9 hours when on Wi-Fi, and 10 hours watching iTunes video. Barring all the phenomenal exterior changes, significant changes have been made under the hood. For starters, the new Macbook gets Intel’s Core M processor, which consumes less power and produces less heat. The exact model of the chipset is yet unknown but its likely a tweaked 1.1 Ghz Intel Core M, which offers slightly less processing power than your standard Core i5 or i7, though offer better and efficient power management.

Okay this might be a “cool” feature, but for most of us pricing would play a major factor. The words ‘Apple’ and ‘budget’ don’t blend in so well, and this holds true for the new Macbook. It comes in two variants, 256GB (1.2GHz Intel Core M) priced at $1299, which is notably higher than the 11-inch Macbook Air. And the second configuration for $1599 features the 12-inch Retina display, 1.2GHz Intel Core M, Intel HD Graphics 5300, 8GB memory.

The new Macbook certainly has features that would give Mac buyers more than one reason to upgrade. The new Retina display, better power management, ultra portability and with significant price cuts, the new Macbook should attract new potential buyers.

Abhinav Mishra
iGyaan Network's Newbie, Abhinav Loves Gaming, Cars and Technology, You can Find Him on PSN Bragging About his FIFA Skills.
You Might Also Like
AppleComputingLatest
Read More