The Apple iPad 2 – What we know So Far

by Bharat NagpalJanuary 19, 2011
8
Now Reading
The Apple iPad 2 – What we know So Far
Browse This Page

Apple has its devices on a yearly refresh, every year around the same time, you get an upgraded version of the iPhone, the iPod, Macbooks etc. Just like that the iPad will also see a refresh. We started hearing rumors of iPad’s redesigned structure and obvious design changes in November 2010.

Now the iPad, was announced in the last week of Jan 2010, we can expect a similar time frame for a refresh of the Tablet. Something has to be new and the Rumor mill has been running haywire over it.

Here are a collection of images over the past month and our thoughts on what the new iPad may be like.

Images like the one above are renders of the carbon fibre patent that Apple had filed on May 18, 2009. This incorporates a liquid metal structure with a carbon fibre back. This would not only make the iPad extremely nice looking, But, also give it a lighter yet solid construction, immensely improving the antenna.

The likes of this happening are however, very- very low. We still have our hopes up.

The second wave of iPad 2 rumors came with iPad 2 cases. These cases started showing up at manufacturers across the china market, showing cutouts for the back camera and an new speaker cutout.

This shows us that two things that might come are the Camera on the back and a improved speaker on the next gen iPad. We feel there is a very high chance of this happening.

Since Apple has been adding front cameras and retina displays to all its products in 2010, it wouldn’t be false to guess that the iPad 2 will have at least a front facing camera and a higher res display, if not a retina display. The new iOS 4.3 beta revealed some interesting information on the next release. A bunch of people snooping around the new files found wallpapers for the iPad that have the resolution . – 1536 x 800px compared to the existing 768 x 400  px that is approximately 4x the resolution (2x both ways).

We also believe, looking at Apple’s trend that the new iPad will definitely have a front facing camera and a Higher resolution display.

Gizmodo posted a good sketch of what the iPad 2 may look like, including resolution enhancement.

Engadget got hold of a dummy of the iPad 2 during CES at one of the case manufacturers booths. this showed a new design- with a flat back and a potentially larger capacity – 128 GB to be precise. This would be just brilliant for the iPad

After a series of breakouts, a whole bunch of new information has come into light. There is news of a new A5 chip, this will be used in the new iPhone this year and apparently the new iPad as-well. Whats the A5 chip? well the heart of the A5 is the multi-core ARM Cortex A9. Which will also be the heart of Nvidia Tegra processors that will be in the series of Android devices slated for this year, along with the Ti-omap processor in the Blackberry Playbook.

AppleInsider claims that Apple is moving to dual-core SGX543 graphics, up from the A4’s single SGX535 GPU. This would enable it to process graphics at 4x times the capability – and the 4x resolution included. We can also expect 1080P hHD video output, and an improved experience along with higher ram and overall enhancement of hardware. But, hey that what we want anyway. 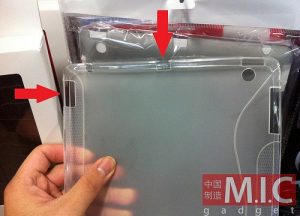 Some more interesting pictures of cases have also shown up. this ones have to new cut-out – claimed possibly for Sd-card slot and a display out. We are highly skeptical that Apple may add a memory card slot to increase memory size, may only act as a camera card reader, But, nonetheless the SD CARD slot would be a great addon. The Video out port may be a possibility, But, then again Apple can use the dock connector for that and dont really need a dedicated video out port, Unless its HDMI.

Bharat Nagpal
Founder and Chief Editor of iGyaan. Bharat likes to keep on top of technology ! Follow Him on Google Plus : Google+
You Might Also Like
AppleComputingHardware NewsLatest
Read More